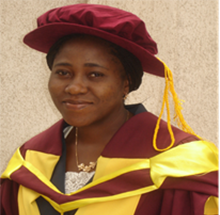 Prof. Elechi Asawalam attended Federal Government College, Okigwe, Imo State, Nigeria where she obtained West African Senior Secondary School Certificate and won the prize of the best behaved girl in 1988. She then proceeded to the University of Ibadan, Nigeria where she obtained a Bachelor of Science degree (Second Class Upper Division)   in Agricultural Biology in 1994 and Master of Science degree in Pathology in 1997. In 2005, she obtained a Doctorate degree in Applied Entomology from Michael Okpara University of Agriculture, Umudike, Nigeria. Between 2004 and 2007, she was a Research Fellow at International Centre of Insect Physiology and Ecology (ICIPE) in Nairobi, Kenya where part of her PhD research was conducted with funding support from the Third World Organization for Women in Science Trieste Italy. In 2010, she was a Visiting Scientist at Department of Entomology, Texas A&M University, Texas, USA and at the Institute of Agricultural Research and Development, University of Port Harcourt Nigeria from 2011-2012.

Prof. Elechi Asawalam joined the services of Michael Okpara University of Agriculture, Umudike in 1999 and lectures in the Department of Plant Health Management. She has to her credit, a book and several peer-reviewed publications in reputable local and international journals.  She rose through the ranks by due appraisal process and was elevated to the rank of Professor of Entomology in 2014. She has served the University as Head of Department of Plant Health Management from 2012-2014 and 2017-2018. She was elected Dean of the College of Crop and Soil Sciences in November 2018.

Prior to joining Michael Okpara University of Agriculture, She worked with Pollutech Nigeria Limited Lagos, as an Environmental Scientist and participated in the State Environmental Action Plan (SEAP) for Cross Rivers, Rivers and Akwa Ibom States, a World Bank – assisted project.  On behalf of Pollutech, she supervised the Mangrove Revegetation of Oil pipeline right of way at Kalibiama, Peterside and Bonny L G.A areas of Rivers State.

Widely travelled, Prof. Elechi Asawalam has attended many local and international conferences, workshops and seminars where she has presented acclaimed academic papers. Her love for Agriculture made her to give bursary awards to four female secondary school students to encourage them to study Agriculture.

Her research focus is on Development of insecticides from plant products and her current field of research include development of semiochemical-based methods for monitoring and control of field insects pests as well as  Monitoring of Bactrocera dorsalis (Diptera: Tephritidae) using parapheromones. She is happily married with children. Prof. Elechi Asawalam can be contacted via email: asawalam.elechi@mouau.edu.ng

Bachelor Of Science in Business Administration